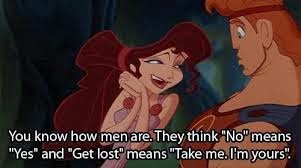 Terra Culp-Ressler with ThinkProgress found that “according to a new national survey of Australians, about one in six people believe that “women often say ‘no’ when they mean ‘yes’.” I remember having that conversation with a guy friend about a year ago. He’s a good guy. Respectful, nice, and so on… but he thought he had girls figured out (funny, huh?). Somehow we got on to the topic of what no means, to which he responded that no usually means no, but he can tell when it means yes. And this is the male mentality – that because they believe women sometimes mean yes when they say no, then obviously every no is a potential yes.

To a guy, No means: a challenge; I should try harder; maybe; yes; definitely; she wants me bad; be more persistent; she could be playing a game; maybe her friends will judge her if she says yes; maybe she doesn't want to seem too available; maybe she just wants to make me work for it; she definitely wants me. 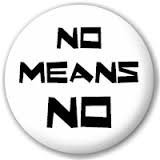 The word “no” is so much more important to women than men, because we’re the ones who have our limits and boundaries crossed when that word is taken lightly. Research has shown that up to 85% of college women have been in situations of physical intimacy where things escalated after she said stop. And there are far too many more scenarios when this word is ignored or misunderstood. It can lead from anything to hurt feelings for both people, or trauma that the girl will try to spend the rest of her life recovering from.

I know men get defensive about these kinds of things and say that not all men are bad. I think many good men can misunderstand or ignore this word. It doesn't make you a bad guy, but it can lead to very bad consequences depending on the situation.

Culp-Ressler says that researchers believe deeply ingrained social norms are the cause for all the confusion about the word “no.”  Researchers say men are socialized to be sexually aggressive, which leads to them believing they are entitled to a woman’s body. Yet women are taught to “display a resistance to sex,” growing up “approaching sex as something that simply happens to them, rather than something they’re an active participant in, and therefore [they] aren’t always comfortable explicitly vocalizing their needs.”

UC Davis communication professor Michael Motley examines this issue from a different perspective. He believes, “The problem is that he is interpreting what she said by trying to imagine what he would mean.” Motley found that “most women use indirect messages out of concern that men will be offended or angered by direct messages, but that most men actually accept direct resistance messages easily and without negative reactions.” I know a lot of girls, including myself, who face this problem. Sometimes we don’t directly say no because we’re afraid of hurting the guy’s feelings, or something like that. We don’t want to be brutal snobs without care for the other person. So, we walk around the word no without directly saying it, which can cause a lot of confusion for guys. But, I guess we shouldn’t be so concerned, because guys understand direct messages easier. There’s less confusion for both parties if the woman just says no. Or at least, there should be.

Motley conducted a questionnaire for men and women to discover what women actually meant when they said something such as no or stop, what men thought the women meant, and what men would mean if they said the same thing. The questionnaire was multiple-choice and asked about 16 common “female resistance messages” ranging from “very direct – ‘Let's stop this’ – to very indirect – ‘I'm seeing someone else.’” The results – “The questionnaire study showed that men were accurate at interpreting direct resistance messages like ‘Let's stop this.’” But for indirect messages, they were as likely to interpret something like “Let’s be friends” to mean “keep going” as to mean “stop.”

According to Motley’s study, men do understand the word “no,” or any other direct message. It’s indirect messages that baffle them, because they think about what they would mean instead of what the woman means. It’s forgivable that a guy gets confused with indirect messages, and even with nonverbal communication. For example, when a girl says or indicates “maybe,” she could mean yes or no. There’s a lot up for interpretation. But they understand no. So then… do they just ignore it?

Let’s get back to the idea that men think no sometimes means yes or maybe. Do women ever mean yes or maybe when they explicitly, straight out say no? In a 1988 paper by Muehlenhard & Hollabaugh that asked the question, “how often do women say “no” to sex when they actually mean “maybe” or “yes“?” 610 undergraduates were asked various versions of this question: “40% reported at least one instance of saying “no” but meaning “yes” in their life, with the majority of them indicating that they had engaged in this behavior multiple times… 85% of women reported saying “no” and meaning it at least once, and about 70% saying “no” and meaning “maybe” at least once.” In conclusion, women do sometimes mean yes when they say no. 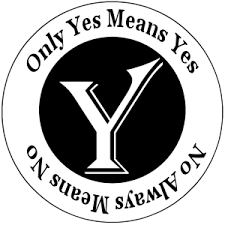 Thus, because no can sometimes be yes or maybe, men like to ignore when it can actually mean no… which is actually most of the time! But it doesn’t matter what it means. If a woman says no, whether it’s to sex, a phone number, a date, etc, just always believe and accept that it means no.  If she actually meant yes, then that’s her fault and her loss. She should’ve just said yes. Women need to be assertive in what they want, and men need to realize that No means: never gonna happen, stop, no way, not at all, end your advances, don’t go further, stop trying, no more attempts please, I’m so annoyed with you, oh my gosh can you please stop insisting, try anything and I will stab you.

And as an additional side note, I understand that men like the chase and women like to be pursued – it makes everything interesting and more fun. But if you have to convince a girl to go out with you, have sex with you, etc, when she really doesn’t want to, then you’re both setting yourselves up for failure. Honestly, if a girl flat out says no repeatedly, and you convince her to change her mind, most likely she’s needy, lonely, likes the attention, or feels bad for you. This has been the experience for me, and many of my girl friends who have eventually said yes to a guy after so many nos. Sometimes it works out, but most of the time it ends badly, because she doesn’t want you. Why waste your time with someone who doesn’t want you back? Why not go out and find a girl who will actually say yes, because you know, we can do that.

p.s. The video in this article is just great. You should watch it to better understand the difference between what its like to be a girl and to be a guy. The Daily Show: The Fault in our Schools