“Laughter is the shortest distance between two people.” – Victor Borge 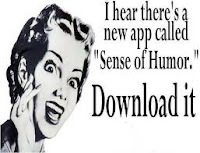 I once was talking to a guy who literally made me laugh out loud all night during a text conversation. He was freaken hilarious, and I nearly fell in love with him. He was a nerdy, little, scrawny engineer major who had a slight nasal problem, and most of my friends thought he was lame and unattractive. I thought he was really cute, and whenever I saw him, I was guaranteed to smile. He showed a lot of funny confidence, saying that he was so cool and dangerous, and I laughed because he seemed to really believe it. Very few guys have genuinely made me laugh like he did.

It’s no secret that humor is a valuable quality for both men and women when it comes to dating, but each value it differently. I can’t stress enough the importance of it. If you can really make me laugh, I’ll probably fall in love with you (or at least I’ll really really like you). According to an EHarmony blog, they “looked at data from 20,000 of our eHarmony members, and found that both men and women listed “I must have someone who is sharp and can enjoy the humorous side of life” as their most important Must Have.” So, basically a sense of humor is like uber important to a whole lot of people. 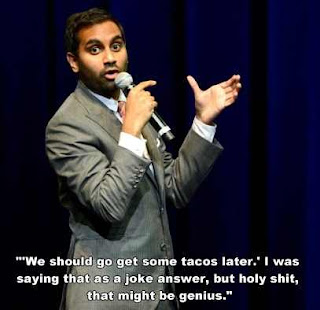 Gil Greengross, a psychologist who studies humor, says that women want a guy who can make them laugh, and men want women who will laugh at their jokes. Many studies back this up, and there is little variation, meaning it’s not usually the other way around. A study about online dating found that when men put jokes in their profile, it significantly increased women’s interest in them. For women, adding humor did little to attract more men.  Meeting a funny guy is more important to women than men because of sexual selection theory, which believes “women are more decisive in whom they select as a mate because of a heavier investment in raising offspring, and the less-invested gender (men) will compete for mating opportunities.” Wilbur and Campbell wrote a whole book about humor in dating, and have found that women think a man’s humor shows how intelligent, warm, positive, and upbeat he is. Their research shows that, “having the ability to create humor requires cognitive flexibility, theory of mind, and communicative skill.” Greengross backs this up with his own studies that show that funny people, whether female or male, are more intelligent on average. 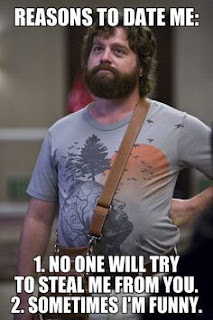 As it turns out, on average men are actually funnier than women. A study asked college students to put funny captions under different images. Before the captions were judged both students and judges were asked if they thought men or women were funnier. Almost everyone believed men were funnier, and the winners of the caption contest proved this. More men had funnier captions, but there were also women who had funny ones too. An interesting twist to this study found that men think they are funnier than they actually are. Part of the study asked the students to rate how funny they thought their own captions were, and men largely were more confident about their humor than women. When the results from the judges came in, many of the men who thought they wrote funny captions actually had low ratings for humor.

That same nerdy engineer who made laugh so much revealed to me that he had an insecurity about being funny. He wasn’t sure if he really was, but I know he made a lot of people laugh by just being his lame yet awesome self. Since humor is so important in dating, I think it’s probably a top insecurity for a lot of men. Knowing this, I’ve made many guys believe that they were making me laugh, when I was just really making myself laugh (usually at them in a lighthearted way). Male or female, making someone else genuinely laugh is not easy, and that’s why there is a whole profession dedicated to it.

Greengross says, “funny people do have more sexual partners, start having sex earlier in life and are perceived to be more attractive in general.” Also important, he stated that there is definitely a correlation between humor and intelligence, both of which are highly valued by women looking for a good potential date. Interesting enough, Josiah Hesse disagrees with Greengross a bit. He argues that if this were true, why are so many male comedians hopeless in dating? He also points out that he really likes funny women. 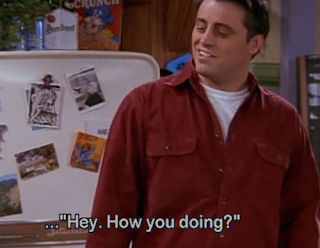 In Hesse’s article “Is being funny the ultimate aphrodisiac?” he talks to Denver standup comedian Jodee Champion, who says, “I don't think it's as simple as: Man + funny = sex appeal… Sex appeal can come from a dude being funny -- but only when combined with swagger." Another comedian, Troy Walker, adds, “Like in college admissions, it's one factor among many. She's looking at all these applications; they're all college graduates, all good-looking, etc. But this guy is funny, so he's catapulted past all these guys. But you have to have game to keep her interested.” Humor will get you far, but humor alone is not enough.

Christina Colangelo looks at the importance of humor in dating a little further by comparing it to other valuable dating qualities in her article “The Funny Factor.” Being funny beats being wealthy, “Unless you’re Bruce Wayne — you can’t beat rich, charming and being a superhero.” Funny is more important than looks, because looks can only last for so long before actual personality is shown. Funny and intelligence tie, because “Intelligence wins her respect and humor wins her heart — can't have one without the other.” The only thing women value more than humor is ambition – “The ability to crack jokes doesn’t erase the need for your girl to imagine a life with you — and a life without work and goals is not going to be a life she wants any part of.”

So now that we’ve established how important a good sense of humor is, what does it actually mean to have one, and if you don’t have one, can you learn how to get one? Greengross says, “A good sense of humor is about timing, the ability to say the funny thing at the right time and to the right people… Humor is largely an interpersonal activity that requires a high level of emotional, social and also mating intelligence.” So don’t despair if it doesn’t come naturally or easy to you. Apparently it’s kind of complicated. Theresa Fisher, who writes for Science.Mic, has pointers for being funny, or at least making your date think that you are. You can click on this link (How to Make Your Date Think You're Hilarious, According to Science) for the full article, but I’ll just highlight a few pointers: 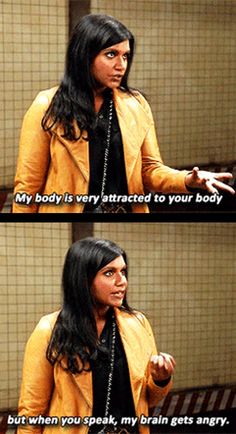 There are four different styles of humor and a study set out to find which one is the best for dating. Affiliative and self-enhancing are positive and adaptive, while aggressive and self-defeating are negative and maladaptive.


The study followed 139 undergraduate students who were in relationships for an average of 19 months. Every three days, they were asked to record how often they used each humor style, and they had to say how satisfied they were in their relationships. Five months later they were contacted to see if they were still in these relationships. 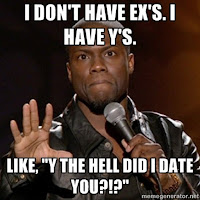 Along with different styles of humor also comes different types, but I won’t get into the list here, so you’ll find it on this link (The 10 Different Types of Humor). Though having a sense of humor is important, having a compatible sense of humor is the most important thing. When I meet a guy who has crude humor and likes watching vulgar comedies, it’s an immediate turn off, though there are plenty of women who find those things funny. I appreciate witty and quirky a lot more, but other types also amuse me. 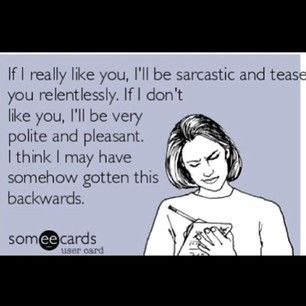 I remember laughing at my first boyfriend for his lame attempts at romance, which I honestly thought were just cheesy most of the time (I know, sounds mean, but we understood each other's humor). He would say and do very cliche things, for example, I was wearing shorts at night once and told him my legs were cold. So he said, "I'll keep you warm," and put his arms around me. I remember thinking, "how does that help if my legs are cold?" and also that it was one of the lamest and most used lines I'd ever heard. But his cheesiness won me over, and I affectionately called him a "Dorky Nerd" while he called me sweet things like "Princess." I guess I have an aggressive humor, but it ended up being very compatible with his, because we both were able to laugh at ourselves and each other very often without being hurt by it. He probably wasn't very funny, but his dorky nerdiness made me laugh a lot, and I loved that.

Psychologist Peter McGraw says, “When people say they're looking for someone with a 'good' sense of humor, they mean a well-matched sense of humor… You shouldn't just have an arsenal of jokes that everyone finds funny. Tell the jokes you think are funny, and if your date doesn't laugh, you're saving yourself from another bad date.” He’s completely right. If you’re a guy, not every woman will laugh at your jokes. If you’re a woman, you won’t think every guy is funny, even if a lot of other people think he is. What I appreciated the most about that nerdy engineer and my first boyfriend was that they were funny because they were just being themselves. They weren’t trying to impress me (well maybe sometimes). They were just comfortable and confident enough to be themselves, which is the most appealing quality about genuine humor. 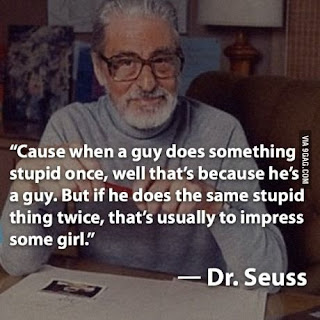 Sources:
Why Jokes are Seductive
Laughing All the Way to the Bedroom
Why Your Sense of Humor is Crucial to Your Dating Success
You Think You're So Funny - If You're a Man, You Might be Right
The Serious Business of Being Funny
Is Being Funny the Ultimate Aphrodisiac?
How to Make Your Date Think You're Hilarious, According to Science
The Funny Factor
The 10 Different Types of Humor
Posted by J. Iliana Serna
Email ThisBlogThis!Share to TwitterShare to FacebookShare to Pinterest