"Kiss me, and you will see how important I am." - Sylvia Plath

Seriously though, kissing is amazing. It produces amazing feelings, has all these great health benefits, and is used for many different purposes, such as in greeting or expressing your feelings to someone. I think it’s one of the most symbolic gestures of the human experience. With Valentine’s Day coming up, I thought I’d share some interesting stuff about kissing, and why you should find someone to kiss. Most of my information came from Kevin Dwyer’s nifty little book, Kiss & Tell: A Trivial Study of Smooching, but I also did some googling.

Random kissing fact #1: Why do we kiss with our eyes closed? Because “a large portion of the brain is dedicated to controlling [our vision]. But when we “close down” this function by shutting our eyes, we free up brain space to heighten the senses of touch and taste.”

Let’s start with the different kinds of kisses that exist. The ancient Romans had three words for kissing: oscula (friendly kisses), basia (kisses of love), and suavia (passionate kisses). But the oldest recorded manual for kissing comes from India, according to Vaughn Bryant, a Texas A&M University anthropologist. This is where the Kama Sutra (Aphorisms of Love) was produced, which is basically “a graphic, scientific look at nearly every possibility when it comes to sex, written somewhere between the first and sixth centuries C.E.” And there’s a whole section about kissing.

Random kissing fact #2: In the Roaring Twenties, kissing was called necking, and mouths were called kissers. 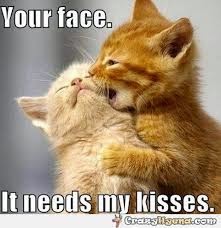 The author of this book, Vatsyayana, says “a respectable person is allowed to kiss the forehead, eyes, cheek, throat, breasts, lips, and inside the mouth. The ‘joints of the thigh,’ arms, and navel, however, are off limits.” Additionally, there are three types of kisses for a young girl: “the nominal kiss, in which lips are touched, but nothing else; the throbbing kiss, in which the female moves the bottom of her lip but nothing else, and the touching kiss, in which the female touches her partner’s lips with her tongue and takes hold of his hands.” They had kissing down to a science, which included naming and describing many different kinds of kisses.

Random kissing fact #3: In greeting, Italians kiss on both cheeks, many Russions kiss three times, French have been known to kiss four times, and some Arab men greet with a kiss on each shoulder.

Helen Fisher, PhD, professor of anthropology at Rutgers University, tells WebMD that there are three different stages of kissing someone. The first one is lust, which is just a craving for sexual gratification, and this stage is triggered by testosterone, which influences sex drive. The second stage is romantic love, “the feeling of giddiness, euphoria, sleeplessness, and loss of appetite when you meet a new love… [because] dopamine and norepinephrine kick in when romance begins.” The last stage is attachment, which involves a sense of security with your partner due to the bonding hormone oxytocin which is released whenever you kiss.

Random kissing fact #4: “When initiating a first kiss, 66% of people turn their heads to the right.”

Need some down time to relax and meditate? Just go kiss someone (preferably someone you like, and who, you know, likes you back). Kissing is “a sensual meditation,” says Joy Davidson, PhD, psychologist and clinical sexologist, because, “It stops the buzz in your mind, it quells anxiety, and it heightens the experience of being present in the moment. It actually produces a lot of the physiological changes that meditation produces.” Krista Bloom, PhD, adds that there are 100 times more nerve endings in your lips than in your fingertips, which makes them highly sensitive and receptive. Fisher says, “There's tremendous intimacy... Even the genitals do not have the sensitivity that the lips have.” Interestingly enough, Dwyer adds in his book Kiss & Tell, that the largest sex organ is your skin, and the most sensitive section of your body is the lower half of your face.

Random kissing fact #5: Male saliva contains testosterone, a hormone linked to sexual arousal in both genders, which is why men like wet kisses far more than women, and why they more often believe that kissing leads to sex.

And of course, there are tremendous health benefits to kissing. WebMD, CNN, and the book Kiss & Tell provide some interesting facts: 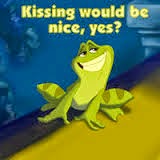 So, why aren’t you kissing someone right now? I mean, if you were ever going to hit on someone, and needed to convince that person to kiss you, I just gave you a whole lot of material. What girl wouldn’t want to hear, “Hey baby, achy stomach? I know how to ease your pain (*insert kiss here),” or, “Feeling stressed? Kissing me will lower your cortisol.” It’s great stuff.

Random kissing fact #6: After a quarrel, several species of primates are known to kiss and hug to make up.
Okay, okay, even though I keep telling you to kiss someone, I don’t mean find the first person you see and plant your lips on theirs. I think there is a lot of value to a kiss, and its meaning and use have an interesting history.

Random kissing fact #7: The freshwater tropical fish, Helostoma temminckii, also known as the “kissing gourami,” kiss when they fight. The males will lip-lock in a test of strength to impress the girl fish. The loser retreats and is sometimes killed.

Kissing has been seen as a binding contract in one form or another since ancient times. Even the Bible has references to God’s kiss (mouth) in Numbers 33:38 and Deuteronomy 34:5, in which Jewish scripture describes Aaron and Moses dying by the mouth of God (which was believed to be an unbelievably pleasant death). Under France’s system of feudalism from the 700s to the 1700s, the contract of loyalty between lord and vassal was sealed with a kiss. When the vassal made an oath of fealty, the lord would kiss him on the lips. Kissing was so bonding that during the Middle Ages, when a man kissed a woman, it was basically a marriage proposal.

Random kissing fact #8: Kissing is more important for women, and is a factor in determining to continue or pursue a relationship.

Noam Shpancer, Ph.D., explains in his article for Psychology Today, “What’s in a Kiss?” that the kiss functions “as a way to express and reinforce feelings of trust, closeness, and intimacy with another.” This is why the kiss is so valued, even though some people may not realize it. Shpancer points out that sex workers don’t commonly kiss their clients and rapists hardly kiss their victims. Kissing is an act of intimacy, and when we kiss, “Our saliva carries hormonal messages. A person's breath, as well as the taste of their lips and the feel of their teeth, signals things about their health and hygiene, and thus their procreative suitability.”

Random kissing fact #9: A mother’s kiss to her baby begins the first release of oxytocin, which is crucial in forming their bond. Opioid is also triggered, which is a pain-masking hormone, so children who are kissed more can handle pain better.

A kiss is something to be valued and greatly enjoyed and appreciated. If you have someone to kiss, you should do it often. In some ancient civilizations, it was believed that “a person’s breath contained his spirit or “essence” and that two people’s spirits were connected through kissing. It’s a beautiful thought, really, and one that still translates well today.

Random kissing fact #10: The identities of the sailor kissing a women in Times Square (from 1945’s Life magazine) were unknown until 1980, when Edith Shain claimed the woman was her. Dozens of men claimed to be the sailor, but Edith tested them by asking what they said to her after the kiss. In 1995, Carl Muscarello was the only one who gave the right answer, which was that he said nothing: “I just walked over and grabbed her and very gently planted a long, luscious kiss on her beautiful lips… and when I was out of breath I just stepped back and… drifted off into the crowd, ran off and kissed a few more ladies, and got on the subway and went back to my home in Brooklyn.”

Sources:
What's in a Kiss?
8 Health Benefits of Kissing
What's So Great About Kissing?
10 Things You Don't Know About Kissing
"Kiss & Tell: A Trivial Study of Smooching" by Kevin Dwyer
Posted by J. Iliana Serna
Email ThisBlogThis!Share to TwitterShare to FacebookShare to Pinterest