You Need to Fail

Recently I’ve realized that I’ve been holding off to applying to grad schools for one very big reason – I’m afraid of getting rejected. This was a funny realization for me, because I’m a writer and I learned long ago that rejection is part of life. Yet the fear of failing is immobilizing, especially now when I feel like I have so many opportunities in front of me if I actually put myself out there and really tried.

Honestly, fear of failing has been holding me back a lot ever since I graduated earlier this year. I feel like such an accomplished young adult, but I’m terrified of my potential or lack thereof. I’m afraid of failing at the things I think I’m good at. If I get fired from a retail job, then that isn’t so bad because it’s not what I really wanted. But if I actually tried to get a writing job, and failed at that, then that would be a little more devastating. It would change how I see myself. It’s not just being bad at something, it’s learning that I’m not good at the things I thought were my calling. If I can’t accomplish my calling, the things I’ve been pursing for most of my life, then what does that make me? A failure.

Luckily for me, I have plenty of support in my life to remind me of a few things I’ve forgotten. I want to share the wisdom I’ve learned about success, failure, and everything in between.

When I was in seventh grade, one of my teacher’s Mr. Chang gave some advice to all the boys in the classroom. In a paraphrase, “Boys, later in life, you’re going to ask a girl out. And she’s going to say no. So, you’re going to ask another girl out, and she’s going to say no. You’ll probably ask fifty girls out, and they will all say no. But don’t stop trying, because one day, one of those girls has to say yes.” He ended his lesson with this, “Accept that rejection is a part of life. Don’t let it stop you. And girls, give the guy a break, unless you don’t like him, then just say no.”

In college, the best advice I ever got about writing was from my creative fiction writing professor, Dr. Kern. She said that rejection is a part of writing, and that when you receive a rejection letter, you should put it on a wall. “When you have a wall full of rejection letters, then you’re ready for an acceptance.”

Dr. Kern also gave me the best advice on what to do after college while searching for a career. She said, “Don’t work at Starbucks. You just got a degree, so use it. Jump into something, anything, and you may not like it or be good at it. So, you know that’s not for you, then do something else.” Her point was that we have all our lives to figure out our calling, but it’s better to fail at something that will lead to something better, than being stuck at something we really don’t want to be doing. 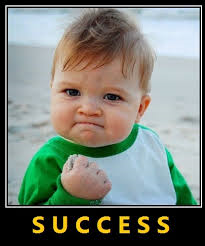 Dr. Glyer was another professor who helped me in college. When I was writing my senior thesis about my future writing career, I interviewed her, and this is what she said, “Feel proud of what you accomplished that day… Invest your heart in the work, not the result.”

There’s wisdom from so many other people I’ve gathered throughout my life, but these three stick out to me the most. Last year, I wrote a blog called, “The Only Way to Fail,” which was to not try. I still truly believe that, but that doesn’t take away the fear of viewing myself as a failure, something I’m sure many people can relate to.

But, from I’ve learned, we need to fail. We need to fail over and over again. We need to get rejected. We need to realize what we’re bad at. Because, we need to learn that if you don’t give up, failure paves the way for success. Rejection teaches us about acceptance. Our shortcomings show us what we’re truly called to do. And fear is the only thing that can hold us back. But there’s one more bit of advice that I always tell people: fear is the worst reason to not do something. Just go for it and fail, because it does not make you a failure.
Posted by J. Iliana Serna
Email ThisBlogThis!Share to TwitterShare to FacebookShare to Pinterest