Do You Ever Forget Your First Love? 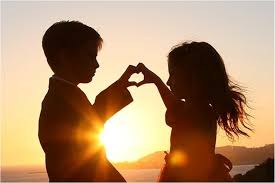 I have a friend, who is in love with his current girlfriend, but he recently sought out his first love. He didn’t think too much about it at first, but I had to ask him why he tried to reconnect with her? He didn’t know at first. I’m not sure if he found out why by the end of their meeting, but nonetheless, I decided to write this blog for him, to hopefully help him with any questions he has.

There is something so mysterious about first love that makes it so unforgettable. I’m definitely no expert on love, but really who is? I know that of all the things I’ve ever written about, I could never write down the story of my first love. I once wrote 46 pages about a guy I kind of dated for three weeks (I’m a writer, I’m not crazy – or maybe I’m crazy because I’m a writer). He really impacted me. But every time I’ve tried to write about my first love, I just failed. I always felt like what I just wrote does not do our love justice. Maybe because love is so hard to capture, but experiences are not.

Though I’m young, and I’m often told I don’t know what love is, I know few things for certain. When I was fifteen I fell in love, and definitely not because I wanted to. I didn’t want to love anyone. I didn’t believe love existed in high school. But there was a boy who made me love him. I had so many walls and defenses and he persistently broke them all down, because he loved me. I know for certain that he was my first love and I was his, and there’s something very special in that. And I also know that though about five years have passed since we’ve been together, we’ve never lost our connection, and I don’t think we ever will.

Falling in love when you’re young is more rare than you may think. Psychologist Carl E Pickhardt, explains that in his years of counseling, he thinks that no more than 15% of teenagers actually fall in love. That small minority experiences: “sexual attraction, mutual enjoyment, emotional knowing, social compatibility, sensitive consideration, physical affection, friendship feeling, and romantic excitement all combining to create a sense of caring, commitment, and completeness that make the other person the only one for you.” It’s like he knows what I experienced, and what I’m sure my first love experienced with me. In fact, I think Pickhardt describes something that takes many years to find, if they ever do find it.

My first love was my best friend, which I’m sure is true for anyone who is in love. He was the person who knew me so well, and to this day probably still knows me better than most even though we’ve hardly kept in contact throughout the years. He was the one I went to for comfort and understanding. I relied on him emotionally, and vice versa. He romanced me daily in various small ways, which included writing me countless notes, serenading me (he had an amazing voice), and doing small selfless acts just because he loved me. Even in a religious sense, he taught me how to have a personal relationship with God. He was the only one for me, no other guy mattered, and I was the only one for him. I was never jealous with him, because he gave me no reason to be. We belonged to each other very faithfully, even though we had a very on-and-off relationship. We once didn’t talk for about eight months, but neither of us had any romantic encounters with anyone else.

Psychologists debate about how much of an impact adolescent relationships have when we're older. Some say that your first relationships, especially first love, is imprinting and forms who you will seek out later, and what kind of relationships you’ll get into. Nancy Kalish, Ph.D., argues that first loves are not imprinting, meaning there is no definitive evidence it will shape your future relationships, or that you will want to rekindle your lost love. She does say, “Together they formed their identities during these formative years, and defined together what love meant to them.”

For my own experience, her words couldn’t be more true. I once read that your first love is the person who taught you how to fall in love. So much of who I am today is because of my first love. And most of my thoughts about love come from our experience together. We were blessed enough to have something beautiful, and our main problem was his parents’ disapproval of me. He gave me a lot of value, self-respect, and provided a good model for any future relationship I would end up in.

When I was a little girl, people would always tell me how pretty I was, but for some reason I couldn’t stand to look at myself in the mirror because of how ugly I thought I was. When I met the guy I fell in love with, he called me beautiful every day we were together. He found every synonym for the word, and called me all of them to the point where it became annoying to be complimented so much. For three years, he constantly reminded me of how beautiful I was inside and out. I remember specifically feeling very vulnerable with him once, and he told me, “Everything about you is beautiful.” And because of how intimately he knew me, I believed him. It didn't matter how anyone else saw me, including how I saw myself. The person I loved thought I was beautiful, and so it must be true. To this day, I can still look in the mirror and see that everything about me is beautiful. 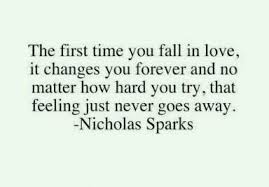 “Life changing is how “in-love” feels in adolescence because it is a far more moving and compelling relationship than the young people have known before. The experience is all consuming — so each is always on the other’s mind. This is the person they want to spend all their time with — so time with good friends is often set aside. It is a merged relationship — so each one feels part of the other, not quite whole when they are not together. They are highly sensitized to each other — so both are alert to subtle interpersonal signals and are easily hurt by small slights from each other. The intimacy is deeper than with anyone else. Too feel so deeply known and deeply knowing makes other relationships seem shallower by comparison.”

Life changing is how I would describe my life after my first love was in it. I used to be highly skeptical about love, pessimistically realistic about life, and had a negative opinion of people in general. He had a genuine love for people, which I admired. That’s now one of my main requirements for anyone I choose to have a relationship with – they have to have genuine compassion for people. He loved me very easily, while I was so closed off to it. Because of him, I developed a love for people, a deeper love for myself, and a love for God.  I’m optimistic about life, and I search for goodness in everyone and in every experience. I’m overall better because he loved me, and made me fall in love with him.

Our relationship ended because we couldn’t overcome the obstacle of his mother disapproving of me so much. The pain of that break-up is possibly the worst I’ve ever known. I remember feeling like half of my heart was gone, or like someone literally ripped off a part of my body. Inevitably, though, we both moved on with our lives. Strangely, whenever we have talked throughout the years, we both feel like there is still this connection, like we’re on parallel paths, going in the same direction, just in different lanes.

I don’t know how to explain this connection. Some people in my life believe we are meant to be together. Others think that I still don’t know what love is, and I’ll learn ten years from now. Kalish explains, “The most common reasons these couples separated years ago were: too young, moved away, or their parents disapproved… Rekindlers were people who wondered what might have been, if the situations that ended their romances had not interrupted their love.” Kalish works specifically with lost love, and people who choose to rekindle an old flame. About two-thirds of her participants reunite with their first loves, but others also reunite with a childhood friend, or college lover, and have just as successful relationships.

As for my friend who sought out his first love, he’s most likely not trying to rekindle anything. But anyone who has been in love can attest that you never forget your first love. That person shaped the most important part of you, your ability to love. And if it was a healthy and good relationship that ended on good terms, there’s no reason to ever forget them. For me, I had a beautiful relationship with my first love, and though he broke my heart, I will never forget all the goodness he brought into my life, and into who I am today. I believe that love never dies, it may just change form, so I have and always will love him. Regardless of where our paths may lead, I’m eternally thankful for his presence in my life.

Sources:
First Love, Lost Love: Is It Imprinting?
Adolescence and Falling in Love
Posted by J. Iliana Serna
Email ThisBlogThis!Share to TwitterShare to FacebookShare to Pinterest