I Don't Believe in Monsters

“People couldn't become truly holy, he said, unless they also had the opportunity to be definitively wicked.”
― Terry Pratchett, Good Omens: The Nice and Accurate Prophecies of Agnes Nutter, Witch 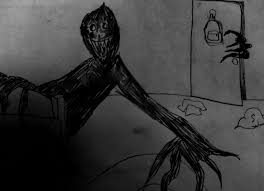 When I was little, I used to believe in monsters. I’m not talking about the ones that live in your closet or under your bed. I’m talking about bad, terrible, people who do bad, terrible things. Those monsters. For safety reasons, most children grow up fearing monsters, people who may seek to do them harm. But then we grow up, and sometimes we stop believing that there are creatures under our beds out to hurt us. Other times, our fear increases, and the monsters have crawled out and turned into the people around us. They even turn into our own reflections.

I’ve learned that seeing the good or bad in others is a choice, but more importantly, I learned that there is good and bad in everyone. My first lesson came from knowing good people, who do good and bad things. There have been times in my life when I thought these people were terrible for what they had done. Then I saw how much they were capable of loving others and being loved, and then I didn't believe they could be so terrible. But the most important lesson came from myself, when I saw myself as a monster, though that wasn’t the word I used at the time.

Before I get into that story, I want to give Paul J. Zak’s interpretation of an evil person, which he calls a psychopath. Zak’s research is all about the moral molecule, oxytocin - the chemical that is the reason for our empathy and caring of others. He believes psychopaths severely lack this chemical, which is why “they do whatever they want without regard for others' safety or welfare.” In his experiments on thousands of people around the world, he has found that 95% of people release oxytocin when they receive a positive social signal, such as “having someone trust you with their money, being touched, and even watching an emotional movie.” That 5% who don’t release oxytocin have many of the traits of a psychopath. 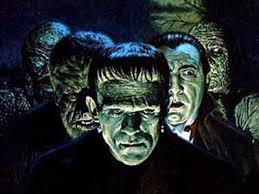 Interestingly enough, Zak has found that anyone can temporarily display the traits of a psychopath due to stress, because high stress stops the release of oxytocin. He says, “Stress narrows one's focus to oneself and we cease being socially competent.” You temporarily lose the ability to care about others when you are really stressed out.

So now you know that if you were to ask Zak to define what a monster is, he would say a person lacking the ability to care about anyone but themselves. Further, a monster is someone who benefits or enjoys inflicting harm on others. With this definition it may already be so easy to classify people you know as psychopaths, or just plain evil. It may be easy to call yourself one because you have without a doubt hurt people throughout your life, whether intentional or unintentional. You’ve had times of selfishness when you just didn’t care about what could happen to someone else. But the worst part of it all is that you didn’t think you were capable of so carelessly hurting someone else.

Finding out what I was capable of happened in slow progression, or I guess digression. Over the course of two years, I started doing things I thought I’d never do, and at first, no one was getting hurt, so I didn’t feel too bad. My experiences are too personal to be descriptive about, but for a very long time I felt like I kept repeating the same mistakes and I didn’t know how to stop. It led to a point where I kept hurting people, not physically, but emotionally, and I felt awful. And I was hurting myself the most. 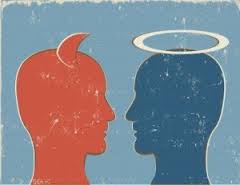 Whenever I talked to anyone about it, no one quite understand why I was being so hard on myself, because they didn’t think I was doing anything that bad. They even kept telling me that I was a good person, but I couldn’t believe it. At the time, I was using very harsh words to describe myself because that’s exactly how I felt – like I was a terrible human being. It didn't matter what anyone said or thought. I didn't like myself anymore. I felt like that because I was going against my values and morals, and I just wasn’t being myself, and that’s what made me a monster.

I had a lost a part of myself, a part filled with goodness, and I didn’t know what it was or how to get it back. Then someone came into my life who reminded me what that thing was. He didn’t know me very well, and he didn’t tell me anything to make me believe I was actually a good person. I just really cared about him, enough to be reminded of the kind of person I actually am, which is a really good person with a really loving heart.

I still make mistakes, and they still make me feel really bad about myself, but I think something that we learn with age is what we are truly capable of – the good and the bad. I think it surprises us most of the time. We didn’t ever think we could hurt someone so much, or even help and care about another so much. It’s hard to see the goodness in ourselves and in others, and it’s so easy to focus on the bad, but both are there.

So, what makes a good person? Zak says, “Actions we call "virtuous" or "moral" are those that put another's needs on par, or above, one's own: honesty, trustworthiness, compassion, fairness.” Basically, whenever you are showing that you care about someone else, you are being a good person. He adds, “The human desire to connect not only with friends and family, but complete strangers is, I have found, what makes us moral. It is our social nature, our need to be around others, that makes us good most of the time.” He believes we are moral because of our oxytocin, which bonds us with others. And remember, most people in the world release this chemical, so chances are that you are one of them (unless you’re a psychopath, but then I don’t think you would care about reading this).

Danielle B. Grossman, MFT, explains that people who believe they are “bad” are generally not “lacking empathy for others, or deriving benefit from harming others.” Instead, she explains, “most people whose thoughts are tied up in ‘feeling like a bad person’ are acutely tuned in to other people’s feelings, feel terrible when others suffer, and do not behave in ways that are any worse than the average human.” In other words, many people who think they are bad, actually aren’t. These people who feel the worst about themselves, typically tend to be the most caring and empathetic. As long as you care about others, you are a good person, but being a good person doesn’t mean you won’t ever do bad things.

A co-worker of mine was married to a military man for twenty years, until she finally divorced him because of how much his experiences had changed him, and how distant he had grown. When she told me the story, she said that she reached a point where she told him, “I don’t like who you are anymore,” to which he responded, “I don’t like who I am either.”

Doing awful things isn’t something I can sugarcoat. No matter how much you care about people or even just one person, you are still capable of hurting them, and that is a terrifying thought. In the case of my co-worker’s ex-husband, he was asked to do horrific things over the course of eight years, and he had seen horrific things. He’s probably not the kind of person that would intentionally hurt his family, or ever stopped caring about them, but he and the person he loved stopped seeing him as a good person because of who he had become. 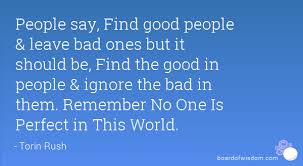 I think one of the hardest parts about believing you are a monster is when someone else, especially someone you really care about, believes it too. For a very long time, someone close to me, who I respected and loved, thought the worst about me. He made me feel like a terrible person, and it took the support of everyone who loved me so that I wouldn’t believe it. He specifically thought that I was inconsiderate, lazy, and selfish. I tried so long to prove that I wasn’t those things, and that I was in fact compassionate and caring. But over time, his words sunk in deep, and I internalized them so that I felt like an inconsiderate, lazy, and selfish person even though I knew I wasn’t. When someone you love believes you are terrible, it’s hard to believe differently.

The reason that it is so destructive to classify someone as evil, a monster, or just a bad person is because it eliminates the possibility for redemption. When you believe you are bad, you don't think you can be forgiven. When you believe someone is else is bad, you don't want to forgive them either. And when you don't believe in redemption for yourself, then it limits the good that you believe you can do. Forgiveness is possible for anyone, but sometimes it's just hard to recieve it, or even to give it. Allowing someone to have forgiveness and redemption can only benefit the world, because it brings out the goodness in the forgiver and the forgiven. In contrast, there is little harm in calling someone a good person, except that you may both believe that the good person is not capable of doing bad. 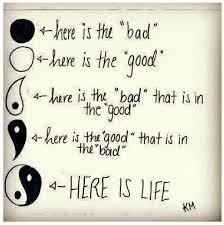 I don’t believe that people are either monsters or angels, because we’re too complex to just be one thing. We can be monstrous, or angelic in different situations, but it doesn’t define who we are all the time. Some people are more monstrous than others, and some are more angelic. But given the right situation, every single person in the world is capable of committing hideous offenses, but also the most compassionate of actions. It’s just what you choose to focus on, and what you choose to see in yourself and in others. When I say that I don't believe in monsters, it doesn't mean that they don't exist. I know that there exists remorseless psychopaths and loving saints. I just believe in choosing to accept the good and the bad in others and in myself, and to be open-minded to what we are all capable of.

p.s. What is most important to me is this: I don't care how much bad you've done in your past. I care about how much good you are trying to do now.

Sources:
Breaking Free From the Bonds of Badness
Why Some People are Evil