Shouting to be Heard 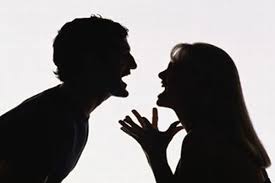 During my freshman year of high school, my mom and I stayed with a sophomore from my school, who I’m going to call Maria. I barely knew her, and I’m not sure how my mom met her mom. It was only Maria, her little brother, and their mom. During our short stay there, the worst part was listening to the shouting matches between Maria and her mom. Maria so desperately wanted her mom to listen and understand her, but neither was capable of listening to the other. They would both start yelling at each other, and their yells would escalate louder and louder in the hopes of being heard. I had never seen two people scream so loud at each other, and I come from a family who all have a solid pair of lungs on them. Maria’s little brother, who was too young to be involved in the matches, would end up crying, so Maria would go comfort him afterward. Even though she'd be crying, she’d still put on a smile for him.


I remembered Maria and her mom because of a discussion I was involved in not too long ago. A group of us had got onto the topic of “Black Lives Matter,” and someone (it’s important to note he was a white male), made a comment about black people shouting to be heard, but that they were going about it in all the wrong way. To be honest, I don’t follow the Black Lives Matter movement very closely, but his comment rubbed me the wrong way. It was also coupled with the fact that I work with an older white woman whose son is a cop, so she often expresses her very strong views on the movement. She says things like, “All lives matter,” cops are heroes, and she worries so much for her son’s life all the time. She feels such strong sentiment when a cop is killed, but doesn’t seem to express much empathy when someone is killed by a cop.

Now before you think I’m going to start talking about racism and cop killings, I’m not. I’m not that political. These two people just reminded me of what it’s like when two people are involved in a shouting match. Both people want to be heard and understand, but neither is being listened to. They are Maria’s mom, and anyone involved in the Black Lives Matter movement are Maria. Really, any minority can be Maria. They are in a position of less power, who so desperately want to be heard, but at the same time Maria’s mom also wanted to be heard. Both sides can keep shouting as loud as they want, getting louder and louder, but it won’t make any difference unless someone is willing to listen. Preferably both.

Anyone involved in a good and healthy relationship knows that communication is vital. In order to have good communication, both people have to learn to listen. It doesn’t matter if it’s a marriage, friendship, or business relationship. The ability to listen is something everyone needs to cultivate. Susan Heitler, Ph.D. writes in her article, “The Art of Listening: How Open Are Your Ears?” that, “A huge part of feeling connected with someone entails feeling that when you speak, the other person cares about what you think. Feeling heard is feeling valued.”

How often do you feel devalued or disconnected because it seems like no one cares about what you’re saying? How often do you think others have felt the same way because you haven’t listened to them? Equally important, how often do whole groups feel unheard or misunderstood? We can’t literally shut off ears. We hear what’s on the news, what’s going on in the world, or even mundane things like how a co-worker’s day went. That doesn’t mean we’re listening to it.

The three problematic listening habits are:

From these descriptions, you can hopefully figure out what kind of listener you are, and whether it falls into the problematic or effective listening habit. More often though, we can fall into any of these habits with different people and in different situations.

It’s really easy to be bad listener because we all want to be heard. For many of us, our desire to be heard trumps the desire to listen to others. I think it has to be a very conscious choice to take a step back and choose to listen to someone else before you try to get them to listen to you.

There have been two techniques that have helped me as a listener, which I know I still need to often practice. The first is simple, and I learned it at a leadership camp I attended in high school. I like to call it the “Shut up and pay attention” technique, but I’m sure the director of the camp wouldn’t term it that way. We did an exercise that involved one person sitting upright in a chair with both feet flat on the floor and both hands on the lap. The person in the chair needed to maintain eye contact with the person in front of them, while listening to them talk for one minute. Most importantly, they needed to keep their mouths shout. This exercise led to the person talking feeling like they were truly being listened to. It also forced the person in the chair to truly listen. The talker felt they had the listener's full undivided attention, and that’s how it should feel like when two people communicate. 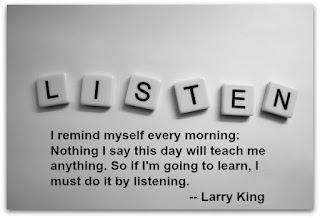 The second technique I learned was from a counselor when I was thirteen. She helped develop the communication between my dad and me during a time when it was at an all-time low. The first step is of course to give your full attention without any distractions. Make eye contact, have our bodies facing each other, and all that. The important step was to repeat what the other person said right after they were done speaking. The counselor explained that our first reaction when someone talks is to talk right after. While they speak, we already think about what we’re going to say next without fully paying attention to what they’re saying. So, if we repeat what they just said, we spend time really listening to them, and then form our thoughts. When you’re done repeating, then you can talk, and the other person has to repeat what you just said and so on.

I think these techniques are not too hard to implement in our everyday relationships, but it becomes a greater challenge when addressing issues such as cop killings and Black Lives Matter. People who feel strongly about such issues, or any issue, are shouting rather than listening, so how can change or empathy occur?

I actually decided to do a little research on these two specific issues, and I think it’s important for people who feel strongly about them to acknowledge some facts. There are more white people killed by on duty cops than black people. However, since the population of white people in the US is significantly larger than the population of black people, “that means black Americans are 2.5 times as likely as white Americans to be shot and killed by police officers,” according to Wesley Lowery who writes for The Washington Post. How should listeners react to this information? By acknowledging that many lives are taken regardless of race, as well as acknowledging the disproportionate percentage of black lives taken. Another acknowledgment should be that more blacks than whites live in fear of being assaulted by cops.


Second fact, in The Daily Wire, Aaron Bandler points out that cops are victims too. He says, “… according to FBI data... 40 percent of cop killers are black. According to Mac Donald, the police officer is 18.5 times more likely to be killed by a black than a cop killing an unarmed black person.” It needs to be acknowledged that whenever murder occurs, whether by cop, black, Hispanic, white, male, female, etc, it is never okay. Every life lost deserves to be mourned and deserves justice. 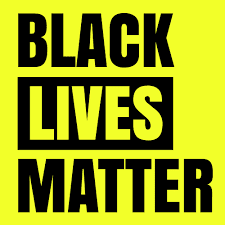 Which brings me to the last fact I’ll present for the purpose of this post. A big part of why Black Lives Matter has gained so much momentum is because a whole category of people feel like they are not receiving justice. Quite the opposite actually. On the Black Lives Matter website, the founders of the slogan-turned-movement explain that they as black women feel dehumanized. They feel that black lives are regarded as less than white lives. If a whole group of people are shouting that they feel they are treated as less than other people, then the response shouldn’t be, “Well, all lives matter… White people die too… Other minority groups are also victimized.” The response should be to listen to why they feel the way they do.

Founders Alicia Garza, Opal Tometi, Patrisse Cullors explain in their manifesto, “We’re not saying Black lives are more important than other lives, or that other lives are not criminalized and oppressed in various ways.  We remain in active solidarity with all oppressed people who are fighting for their liberation and we know that our destinies are intertwined. And, to keep it real–it is appropriate and necessary to have strategy and action centered around Blackness without other non-Black communities of color, or White folks for that matter, needing to find a place and a way to center themselves within it.”


I don’t like to often write about political or touchy issues, not because I’m afraid of offending people, but because I don’t like to spend energy on issues I have no control over. I have no control over the above mentioned issues, but I can at least try and help the way people react to such issues. Instead of getting defensive or dismissive, why not try to acknowledge and listen to why others feel so strongly about such things? Why not reaffirm someone else’s distresses before implementing your own? Why not try to listen first, instead of trying to be heard? Nothing gets resolved when two people are shouting.

“We have two ears and one mouth, so we should listen more than we say.”
― Zeno of Citium

p.s. Here are some more tips on being an active listener

Sources:
The Art of Listening: How Open Are Your Ears?
Here’s How Many Black People Have Been Killed By Police This Year
Aren’t more white people than black people killed by police? Yes, but no.
5 Statistics You Need To Know About Cops Killing Blacks
Prison Racial Demographics
Criminal Justice Fact Sheet
Black Lives Matter